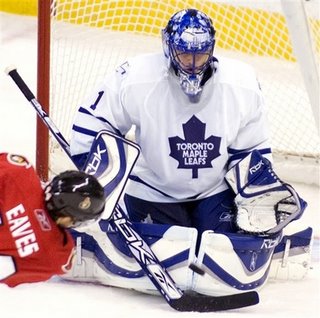 What a change of fortunes for the Leafs, who really were stymied last night by Martin Gerber in their 4-1 loss at home. Tonight Gerber looked completely off his game, and wasn't pulled from the net until the 3rd period when it was 5-0. Now why would Sens' coach Bryan Murray do that?
Darcy Tucker and Chad Kilger scored 2 goals each, and Kyle Wellwood, who was playing so well in the season opener, was rewarded on the scoresheet tonight with 4 assists! Andrew Raycroft is quickly silencing his critics, with a 34-save shutout performance. As he did for the majority of the game in T.O., he is squaring himself to the shooters.
Chad Kilger is shooting the puck alot more in the first 2 games, and he really has a bullet. He scored the Leafs' first goal with a howitzer from the left side, where he is shooting alot from early in the season. He (along with Tucker) had 6 shots on goal tonight.
Click here if you want to see the box score of this ass whooping.