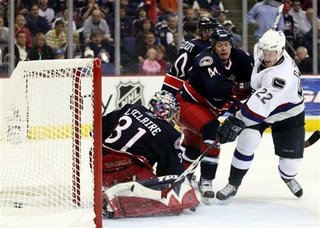 Already this new NHL season, in a big way, has been thrilling and is capturing the imagination of the hockey fan. With Daniel Sedin scoring the OT winner against Columbus last night, capping a comeback, the Canucks are 2-0 to start the year. But the biggest suprise to me is how Roberto Luongo has not not really had to be absolutely outstanding yet. The Canucks are playing the best team defence that I've ever seen them play. Markus Naslund looks at home with the Sedins, which I didn't see coming, and he is playing good defensive hockey...saw what? The plan that Alain Vigneault has drawn up is working, and the Canucks look like a cohesive unit for once. 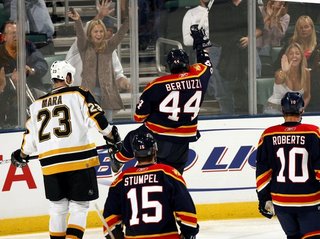 Did anyone see Todd Bertuzzi leading the Panthers to a 8-3 win over the Bruins to start the season, and tallying 4 points? The Panthers have enough firepower to score an average of 5 goals per game this year. So Alex Auld, who was good last night stopping 34 of 37 shots, only has to be so good, right? Bertuzzi looks revived and is already clicking with Joe Nieuwendyk and Nathan Horton (and some ladies too, judging by the picture!) Is he going to score 100 points this year? Are the Panthers going to make the playoffs? The answer to both of these questions my friends is YES, barring injuries of course. 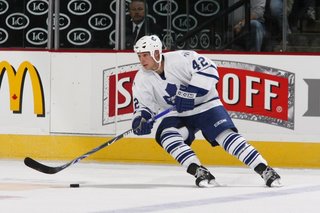 Finally, the Leafs are suprising me as well. And how about Kyle Wellwood? 4 assists in the beatdown of the stinky Sens. He is thriving on the top line. Andrew Raycroft has looked pretty solid in goal, giving the Leafs a chance. But the jury is still out on this team IMO. There are so many question marks on all areas of this team that each Leaf game I watch makes me bloody nervous! It should continue to be that way all year. But isn't that the fun part of this game? It's the ups and downs, the absolute glee followed by the cursed anger and despair. It's the love/hate relationship with your team! It's the Florida Panthers cheerleaders......ahem!