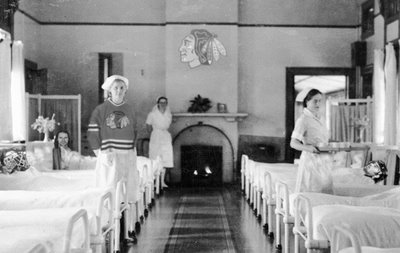 Finally, Western Canadians who don't have Express-vu get to see a Black Hawks game. You have to think that the Hawks are in trouble now. With injuries to key players like Martin Havlat, Michal Handzus, Tuomo Ruutu, and of course Nicolai Khabibulin, the Hawks are on the verge of running into a losing skid. The Hawks had their best start to a season since 1990-91, winning 4 of their first 6 games, but the Hawks have lost their last 2. These losses are coming on the heels of the above players (minus Ruutu) getting injured seemingly all at once. They were riding high with their new acquisitions until that point.
So, without getting all stat-crazy, let me just say that the Hawks will be vulnerable, and we should see the Canucks take advantage of that. The Canucks were getting secondary scoring last game against Dallas, and I'm thinking that there will be even more of that tonight, unless Hawk backup goalies Sebastion Caron or Brian Boucher steal the show, or the Hawks are better defensively than I thought.
5-1 Canucks. They get their powerplay going again, Morrison and Salo get 3 points each, and Kesler finally gets one. Hell, even Bulis should snap out of his funk too. Anything else would be uncivilized.

This has not been a good night for Chicago, and a great night for the Canucks. The boo-birds are out in Chicago. The Canucks have played a fantastic game. They finally capitalized on the powerplay, on a goal by Brendan Morrison.
There are alot of positives for the Canucks in this one.
1)More secondary scoring! Thank gad! Goals from Cooke and Morrison may break them out of their slumps.
2)Roberto (Bob*) Luongo. He didn't let the first goal in, and didn't let any goals in for that matter. A solid game for him, with some brilliant saves. Love the way he dragged his leg out to rob Radim Vrbata early in the game.
3)Henrik Sedin is shooting the puck! He now has 2 goals tonight. Anyone else like his first goal? I think he intentionally fluttered the puck on Brian Boucher, who completely wiffed on it. Nice way to get your first goal of the year, Hank!
5)Whenever Ryan Kesler starts getting points will be a good thing. He is playing very well in all areas and needs to be rewarded soon.
6)Taylor Pyatt looks at home with the Sedin line. He bagged his 5th of the season tonight. Have all his goals been in the top shelf this season? He's got a bullet.
7)Holy crap. Hawk fans are booing their team. It appears the Hawks will slump without their key players in the lineup.
8)Hey Hut...suck it! You said Hawks by 2? I said 5-1 Nucks. Who's the man?
9) Kudos to Shorty for saying that referee Magoo waves his arms around so much that he is going to take flight. Hilarious.