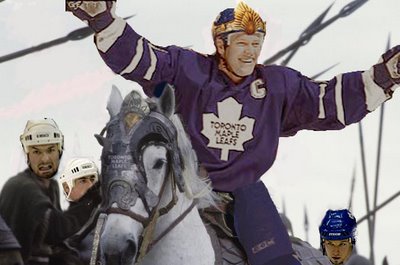 Mats Sundin reached the 500 goal mark in dramatic fashion against the Calgary Flames. He reached the milestone at home, with a hat trick, and scored the overtime winning goal to do it with a wicked blast right past Mikka Kiprusoff's head. It was an ultimate 'feel good' moment for Maple Leaf and Mats Sundin fans.
Mats now has 500 goals, 675 assists, and 1175 points in 1162 games played. He is a consistent work horse for the Leafs, and a great captain. Paul Maurice is relying more heavily on Sundin this year than Pat Quinn ever did, and Sundin has responded with 8 points in his first 6 games this season. The Leafs are suprising many already this year with a 3-1-2 record so far, good for 4th in the East. Much of this can be attributed especially to Sundin, and his linemates Darcy Tucker and Kyle Wellwood, who are on fire.
The only thing that Sundin needs to do now is lead the Leafs into the finals to silence his critics. He can't be completely blamed for the Leafs' lack of playoff success. Pat Quinn's defensive strategies (or even the players' collective attention to defence) have hindered the Leafs in the past. Could this be the year? Paul Maurice is doing wonders with this team, and is making great decisions. He is finding the chemistry on all his lines, and has got the Leafs shooting alot of pucks at the net. They lead the NHL in shots for with an average of 38.8 shots per game. However, the Leafs are 19th in the NHL for shots against, averaging 31.3 SA per game. This needs to be improved, regardless of the fact that the Leafs score an average of 3.50 goals per game, which is 6th in the NHL.
Besides all of that, congrats to Mats. He is the best Swedish captain in the game and has reached Doug Gilmour and Wendel Clark-like hero status in Toronto.
Did you miss the moment? Check it out.. Gad it gives me chills...