A great night of hockey

Share All sharing options for: A great night of hockey 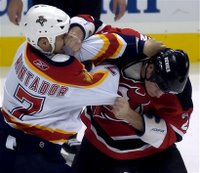 Did anyone see the Cam Janssen/Steve Montador fight? It resembled the Tucker/Eaves fight from the other night. Montador did not look like 'El Matador' in this one, and bit off more than he could chew. To his credit, he was taking a stand against Janssen for running Van Ryn and especially Gary Roberts, who was laid out by Janssen earlier. I have not seen much of this guy yet, but he really is a beast.
The Panthers are so inconsistent, and lose 2-0. They only had 4 shots in the 3rd period.

Nice to see the Flyers win one for their new coach John Stevens. Peter Forsberg returned to the lineup and scored the winner in the shootout. How does that feel Hitchcock?
Hey, does Slava Kozlov have amazing shootout skills or what?

You have to laugh at the Oilers for losing to Phoenix. I wonder if Gretzky gave them a tearful speech before the game, because the the Coyotes looked like a motivated team for once. They even fought with eachother. Did you see Derek Morris make a pancake out of Marty Reasoner's face? Another one-sided fight on the night.
Go figure, Georges Laracque scored another goal on his former team. If he would just pretend that every team the Coyotes played were the Oilers, he'd get maybe 83 goals.

I hear the Boston fans were littering the ice after the Bruins' loss tonight. Andrei Markov scored the winner with 1.2 seconds left in the 3rd period, and the fans threw a LOT of garbage onto the ice. It was so bad that the referees decided not the drop the puck to finish the game off. Yikes.
Alexei Kovalev recieved a 2-minute penalty and a game misconduct for unsportsmanlike conduct. After the game he vented:

"As you saw, the refs screwed up the whole game, and then they tried to fix it at the end. I wish, if they were going to decide to have a bad game, they would be bad for both teams," said Kovalev. He was complaining that opponents have tried to take out his knees in the past 3 games. "I have to protect myself."

Will the real Marty St. Louis please stand up? He scored a hat trick in Tampa Bay's
5-1 drubbing of the Hurricanes tonight. Is this St. Louis breaking out of his 'slump' or does he have Bertuzzi syndrome?