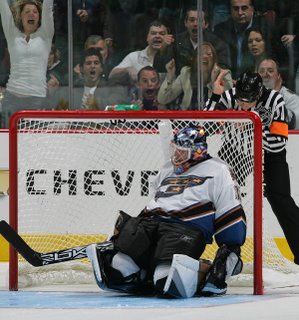 Well, I guess we can stop picking on Temujin. He was at the game tonight, and the Canucks squeaked out a win over the Capitals 3-2 in a shootout, with Brendan Morrison sneaking a shot through Olaf Kolzig's pads to win it in the extra frame. Good on Morrison, who shrugged his shoulders after the shootout goal as if to say: "I'll take it."
What a game. The Nucks really should have won this one about 7-2, but Kolzig made kept the Caps in it. The final shot total was 44-21 in favor of Vancouver. The Canucks played a great game. If you could fault them, you could say that they took too many penalties in the 2nd period when the Capitals finally started playing well. When they were up 2-0, and dominating, Ohlund took a holding penalty, and Dainius Zubrus scored a PP goal. Alex Ovechkin scored another just under 2 minutes later, and uh-oh, we thought the Canucks could ruin this one, and that Temujin really was a f---ing curse to the team. But the Canucks held on until the 3rd period started, and then dominated the 3rd period, outshooting the Caps 15-2. But Kolzig played brilliant.
An uneventful OT solved nothing, and we thought for sure that Roberto Luongo would gaff in the shootout. However, Matt Pettinger shot the puck at Luongo and Yo stopped the puck easily. Naslund absolutely undressed Kolzig and scored on a backhand. Then Ovechkin made Luongo look stupid, but put the shot off the post. Next up was Morrison, who faked left and right on Kolzig, and then put the puck between Kolzig's legs. Kolzig was already sliding backwards, but the puck squeezed through his legs and crossed the goal line. What a terific climatic ending to the game.

Zanstorm's 3 Stars
1. Olaf Kolzig. Amazing saves. Was the best player of both teams.
2. Brendan Morrison. 1 assist, a +1. The best he has played all year.
3. Roberto Luongo. Looked pretty solid. Saved the Canucks' butts when Washington woke up.

What do you guys think of Ovechkin? I think he looked inconsistent. Sure he had 2 points (1 goal 1 assist.) But he disappears for large segments of the game, IMO. A part of that can probably be attributed to the Canucks' good coverage of him tonight.
The Nucks also did a great job neutralizing Alexander Semin, who was only visible tonight when he was knocked on his ass, and his nose was bleeding.