Share All sharing options for: GM Place has a new score clock tonight/Preview 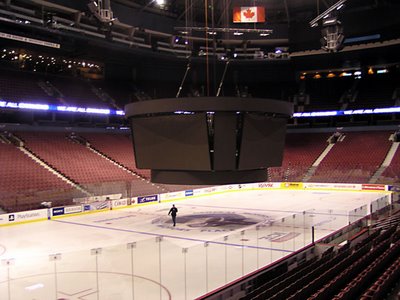 From Canucks.com. It is the NHL’s latest ProStar centre-hung video display system, or, a super powered score clock. It weighs 49,000 pounds and its four large HD-ready light emitting diode (LED) screens (13.5 feet by 24 feet) display 4.4 trillion colours. In all, the eight computers and 1.2 million pixels spread over eight screens draw as much power as your average house – which isn’t too bad considering it’s roughly equivalent to 80 big-screen televisions. Check out the article on Canucks.com for more.

Ok, on to the game tonight against the Capitals.
Have no fear. Roberto Luongo had the Capitals' number last season when he was with the Panthers. He was 7-0, with a 1.96 goals against average against the Caps last season.
The Canucks have won 3 straight games against the Capitals in recent years, and have 6 out of 8 games as well. As TSN mentioned, the Capitals have not beaten Vancouver since February 2001. So there is reason to be optimistic, right?
Maybe. The Capitals are better than they were last season, but realistically, they only have one line. So I am expecting the Canucks to shut them down for the most part, and achieve a 4-2 victory tonight.
Can't wait to watch the Ovechkin/Semin combo.
Oh, and I should mention that our friend Temujin is at the game tonight. The Canucks have never won when Temujin is at the game. Their record is 0-7 with him in attendance. In an effort to change this bad luck, we pitched in money and bought him a Capitals jersey, (since he always wears Nuck jerseys) and created a sign for him that reads "I love Semin." Not sure he'll make it on TV with that, but hopefully no one kicks the crap out of him, because he doesn't have medical.