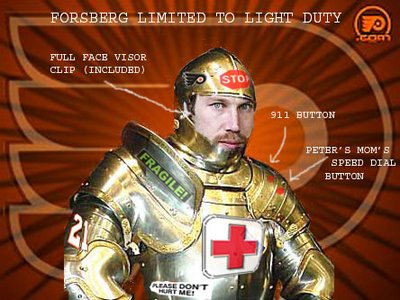 Forsberg is hurt again. This time it's his wrist. Bobby Clarke has ordered him to wear this new armour attire for the remainder of his stint with the Flyers.
The Montreal Canadiens players have already ordered 23 of them. However, the armor has alot of pros and cons.

- the suit can withstand a Chris Pronger slapshot from close range.
-it makes a cool banging sound when a player wearing it is checked into the boards.
-Sean Avery will break his limbs if he hits you. Everybody wants to see that.
-a player wearing the suit cannot be hooked or held up because it is too slippery. This will eliminate obstruction calls in the future.
-players are injury-free, or their money back. Ironman record in jeapordy.
-player looks like a hero. Girls love heroes. Scoring is a given.
-say your name is William Wallace. That will scare the shit out of everybody, except the girls.

-not very flexible.
-not very breathable. You'll sweat like a hooker in church.
-impedes a player's speed
-difficult to hop over the boards for a line change.
-impossible to get up after falling down.
-jersey doesn't fit over top of it.
-the guys are going to laugh at you.
-did I mention the guys are gonna laugh at you?