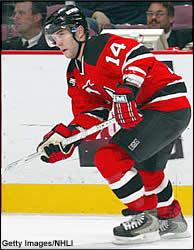 And just like that Lou Lamoriello and the Devils sign Brian Gionta to a 3 year deal at $4 million per season.
So the sheet was already signed weeks ago, and Lou was just waiting for the ok on Mogilny and then the dumping of Malakhov on a team that would take him.
Now we should hear the announced signing of D Paul Martin pretty quick?

Lamoriello has finally made comments about the ordeal to the press.
"We were very fortunate with the patience and loyalty that Brian has shown," said Lamoriello. "Brian, Paul, David, Scott and Erik - they all knew the situation we were in. We were totally up front with the positives and the negatives and that we would do everything we could. We wanted them here."

"Some of them (contracts) could have been done earlier but until you know what the pool of money you have to work with, you just can't and I was honest with the players about that."

You have to admire the cunning Lamoriello. He quietly goes about his business and gets the job done.
Now, why was Mogilny's situation left until the final minute? Was that a bargaining tactic? Lou wasn't going to play Almo this season anyway.