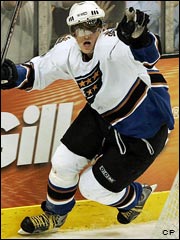 The lads finally get to come home and stick around for a little while now. The whole city, at least according to the Sun/Province, seems to be gaa-gaa over Ovechkin's mere presence within the city boundaries. While having not seen much of the Caps play this year (or the past few seasons for that matter) I think the teams are fairly even with the overall tilt going to Vancouver because of their goaltending and talent on the top two lines: basically the Sedins, Nazzy, Morrison, Pyatt and Kesler (or the interchangeable Bulis if he hasn't pissed off Vigneault again by the time the puck drops) verse Ovechkin, Zubrus, Clark, Semin, Sutherby and Zednik. I forgot the Caps have my boy Brashear too but, honestly, I have no real comment to add on that other then he'll win if any Canuck really feels like scrapping. As for Kolzig and Luongo? With all apologies to the German state, I'll side with the latter.

Barring a complete change in the Canucks style of play, this game could come down to special teams (which isn't a terribly great sign for Vancouver). I'm willing to guess the powerplay will click again tonight and that could be the deciding factor.

Predicted Score: 3-2 Canucks. One of the Sedins scores and Kesler gets his first too. Bulis has a better game and stays out of the box which results in him getting a large colorful lollipop and a gentle pat on the head from Nonis, not unlike the same gesture one would give a puppy for not pissing on the new rug.

Pithy Thought: Why has no reporter (and maybe one did and I missed it) stood right in the face of the ever clownish Janne Niinimaa and ask something like "So Janne, about that prediction of beating the Sabres on Monday…you lost 4-1 and you, specifically, were a complete and utter non-factor. To speak nothing of your career stats that are steadily going into the toilet and your mighty single point for this season which pales a bit in contrast with Mike Ribeiro’s start…oh, Ribeiro? You were traded for him a few weeks ago. I know, huge laugher for the Stars huh? Anyway, all things considered, does it concern you that your career has become virtually irrelevant and at this point you’d be a better contributor to your team if you resigned and sold Hab Christmas trinkets from a paper bag outside the stadium parking lot?"