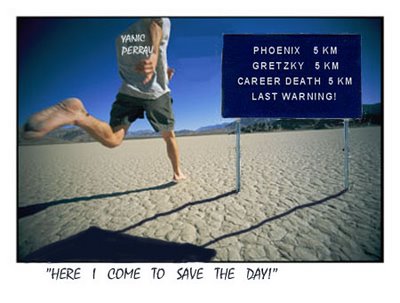 The Coyotes have acquired a bit of help to offset the longterm loss of Steve Reinprecht, signing center Yanic Perrault to a 1 year $700,000 deal. That is a pretty good pricetag for a player who had a career year last season in Nashville, scoring 57 points in 69 games.
According to TSN, Perrault had recently turned down offers from the Black Hawks and the Islanders. The Senators, Flames, and Lightning also showed interest. These teams MUST HAVE offered Yanic more than $700,000. So why did he sign in hell for so little?
Apparently he has a condo in Phoenix. At least, that's what I heard on HNIC this past Saturday.
Perrault still has alot to offer. He led the NHL last season in faceoff winning percentage (62.1%) The average for his career is 62.5%. He immediately injects more life into a dying team, especially on the powerplay, where winning that many faceoffs will give the Coyotes control on the PP more often.
How much will Perrault's presence change the Coyotes' fate? Probably not very much. In fact, his points per game average could take a huge hit playing on his new team, IMO.
I would have rather seen him go to the Flames. I think he would have fit in much better there.