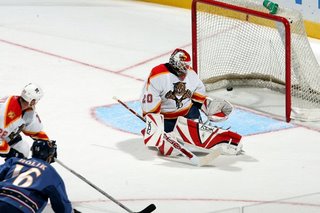 I hear that Ed Belfour tried to commit suicide tonight after the game..it's true! He walked out onto the street in front of a bus and it went right through his legs! Haha! (A Hodge joke)
Belfour didn't last long against the Thrashers tonight in a 6-0 loss. He was yanked by Jacques Martin early in the 2nd period after allowing 4 goals on 9 shots. Todd Bertuzzi went from hero to goat tonight, as was a -3, as was Ruslan Salei. In relief of Belfour, Alex Auld made 23 saves on 25 shots. But the offensive flare the Panthers showed in an 8-3 win over Boston on Friday night was nowhere to be seen tonight. Marion Hossa and Slava Kozlov each had 3 points.

Other NHL quips:
*Does anyone have Alexander Semin in their pool? Sheeit! He got 3 more goals tonight.
*The Sabres are on a mission (3-0 to start the season) Love how Jason Pominville breaks the Senator's hearts again tonight. This time he didn't go around Krusty the Clown and score.
*Don't count out Dallas. They schooled the Devils tonight and don't look like they are going to slow down much. The Lightning losing Darryl Sydor really was a bad thing, and Dallas is reaping the rewards of a unified Sydor/Zubov combo.
*Did the Rangers and Flyers really go through 25 shooters in the shootout before Marcel Hossa scored? I was too busy singing kareoke to see the highlights!