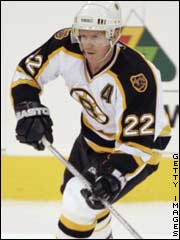 TSN is reporting that the Flyers are pursuing UFA Brian Leetch at the moment. With Mike Rathje out with a herniated disk, it could make sense to shop for some offensive talent on the back end.
Well, now everyone has been reported to be interested in Leetch, right? I don't care what anyone says, Leetch will bolster any blueline even at the latter stages of his career, but is he willing to play anymore? His agent doesn't even know that.
"Brian has not made any decisions about the season so far," Jay Grossman told the Inquirer. "We've been contacted by a number of teams about playing this season. There are a number of things Brian has to sort through. He's made no decision in his personal situation."
Right. So don't hold your breath on a Leetch return. Me personally, I would like to see him playing again, even if it is for those stupid Flyers.