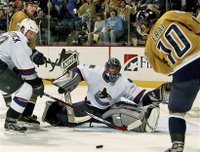 What a wild night of hockey. The action tonight did not disappoint. The Canucks suprised me with a come from behind victory over the Predators, who had won 3 in a row on their road trip in New York. The biggest story of the Nucks victory was SECONDARY SCORING. Yes, we finally got some of that from the Canucks tonight from guys like Jan Bulis, who scored the Canucks' first goal and also had 1 assist), and Brendan Morrison, who tied the game in the 3rd period. Alain Vigneault, who reads Waiting For Stanley, put Taylor Pyatt on a line with the Sedins, and Naslund with Morrison and Bulis. The result was balanced scoring. Even Kesler and Burrows looked alot better tonight.
If Anson Carter was the Black Knight last season, then Taylor Pyatt is the White Knight this season. Yeah, Beaner, I coined that phrase. Forget about it.
Luongo really closed the door on Nashville after he allowed the 3rd goal, and gave the Canucks a chance to win. We really didn't want to see this game go into a shootout did we? Thank Saint Luke that Krajicek put the puck on net in OT, and Vokoun missed it completely. Canucks win 4-3. I am trully impressed by the team effort.
I wonder how Willie Mitchell is feeling after that hit from Jason Arnott. It was a borderline boarding call. Mitchell wobbled to the bench much like Kapanen did after Tucker smoked him in the playoffs 2 years ago. He did not return.
Zanstorm's 3 stars:
1. Jan Bulis. 2 points and a spirited effort.
2. Lukas Krajicek. I like this dude. All over the ice tonight and bagged the winner.
3. Paul Kariya. 6 SOG, 1 assist, a +1.
BOX SCORE

The Leafs did not have the same fate on this night. Brendan Shanahan scored a goal scorer's goal on Andrew Raycroft on the PP late in the 1st and the shootout winner to bury the Leafs. Is it any wonder why the Red Wings are floundering without this guy in the lineup?
Darcy Tucker continues to play his trump cards for a raise in renegotiations with 2 goals tonight, his 6th and 7th. Jeff O'Neill bagged a beauty in the top shelf over Henrik Lundqvist with only 3 minutes left in the 3rd to send this one into OT. Too bad he couldn't do that more often. The OT was uneventful, and only Shanny scored a shootout goal, putting the puck through Raycroft's legs.
It's never a good idea to give the Rangers a chance to go on the power play. They are bloody lethal, scoring 2 PP goals tonight.
At least the Leafs were competitive tonight, I will give them that much. Ian White goes from goat to sort-of hero with 2 assists and a +3 rating. He kind of looks like a weaker version of Brian Leetch. Kudos to Alexei Ponikarovsky as well, who is improving even more. He scored a beauty breakaway goal in the 1st, and looked like Mats Sundin doing it. His physical game is also impressive.
BOX SCORE
Zanstorm's 3 stars:
1. Brendan Shanahan. Deadly.
2. Darcy Tucker. 2 goals, 1000 hits.
3. Jaromir Jagr. 2 assists, impossible to contain.