Share All sharing options for: Canucks do it Salo-style 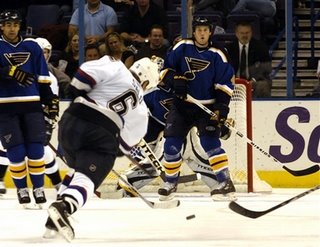 Sami Salo, the Finnish God, scored the winner for the Canucks with only .7 seconds left in ooooooveeerrrrrrtiiiiiimmmmme. He faked out a Blues forward at the point, went around him, and blasted a shot over Curtis Sanford. It was a dull game up to the 3rd period that did not have much flow because of all the penalties. The 3rd was good because of the late comeback. There were 22 penalties total, 10 against Vancouver and 12 against the Blues. The 4 goals scored in regulation were all PP goals.

Quick notes:
* the Canucks came back from being down 2-0 in the 3rd period.
* Taylor Pyatt scored his PP goal playing on a line with the Sedins. He looked like a white version of Anson Carter standing in front of the net. He has better hands than I thought. That was his 3rd goal this season. Hey Vigneault, maybe you should leave him on that line.
* Markus Naslund played the point on the PP tonight, and didn't look out of place. At least he can get his shot off there, and that is where he scored his goal tonight. If I saw him one more time circling in the slot on the right side and missing his shot like he has done all this season and last UNSUCCESSFULLY, I was going to drink a bottle of cyanide.
* Curtis Sanford (love the mask) stopped 36 of 39 shots for the Blues. A great game by him.
*Luongo saved the Canucks asses in OT, taking a sure goal away from Doug Weight. Luongo also let the first shot in tonight again as well. But it was a perfect shot from Petr Cajanek.
* Linden's time on the ice: 5:48. What's the fucking point, really? Bring back Magnus Arvedsson and let him take Trevor's spot. Or Artem Chubarov perhaps!