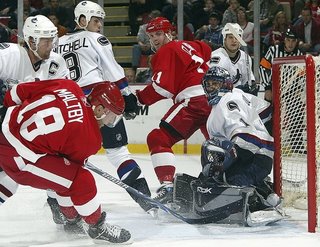 I can't believe I am saying this, but the Canucks look good defensively through 1 period! And I mean team defence. They were shorthanded 4 times in the 1st period, but held Detroit at bay.
Tomas Holmstrom had his pylon-like frame in front of Luongo for each powerplay, but amusingly, Luongo is so damn tall that he was practically looking over Holmstrom's shoulder and watching where the shot would come from! Hilarious.
Jan Bulis had the best chance all by himself in front of Hasek, but rang the puck off the crossbar.
Soon after, Mikael Samuelsson took an interference penalty, the Canucks went ahead with a powerplay goal from Markus Naslund. Sami Salo shot the puck from the point and it hit a body in front and then deflected off Naslund's head and into the net, with only 4.8 seconds left. A good reward for a well played period.
..............
A few minutes into the 2nd, the Red Wings cough up the puck in their own zone (for at least the 3rd time tonight), Josh Green rifles the puck at Hasek, who lets out a rebound, and Trevor Linden bangs it in!

Finally about 1/2 way through the period, the Wings start clicking, and the Canucks hold them off until Henrik Zetterberg scores a weak one on Luongo from a bad angle.
The Nucks are taking too many penalties! That is 7 now right before the 2nd period ends! But the Nucks are killing penalties to perfection so far, forming a box in front of Yo!Luongo!
(Hey geez, this game is so good that I am not even switching to the Leafs/Sens game, which is being DOMINATED by the Leafs, 4-0. Ha! Gerber is having a tough night....GOOD!)
.........
The Canucks slow the pace down even more in the 3rd period, clogging up the neutral zone as they've done all game long, and like I have never seen them do before. And Luongo stops anything that the Wings can muster, which wasn't much! A helluva road win by the Canucks.

Notes: This is EXACTLY how the Canucks will need to play to be successful. All 4 lines had short shifts, and hustled their asses off, non stop. It is a new team with a new attitude under Vigneault.

Now, every Canuck fan reading this needs to go to Behind The Jersey and heckle Christy a bit...or ALOT. Spam her, I say!