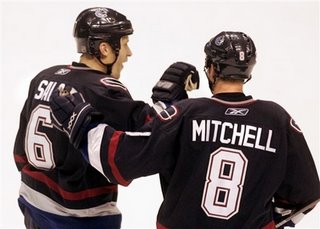 The Canucks have come to play tonight. The shots were 17-7 Nucks. But Dwayne Roloson stopping everything the Canucks are throwing at him, with the help of about 2 or 3 shots off the post as well. But you can combine this one-sidedness with the fact that the Oilers have not shown up yet. Hopefully they stay that way.
----------
The Oilers come out hitting in the 2nd. Their first serious rush up ice..Bergeron skates in on the left side, lets a wrister go. Luongo lets out a juicy rebound and there is Raffi Torres to put the rebound home. Go figure.
About 4 minutes later, the Canucks pull a mirror-image goal. Bieksa breaks in on the right side, wrists it on net. Roloson lets out a huge rebound and Taylor Pyatt bags the rebound goal! This reminds me of playing NHL 2004! Rebound goals! 1-1 game!
The Canucks are playing very well defensively, and neutralizing the Oilers' speed. With only a minute left in the 2nd, Sami Salo skates with the puck behind the Oilers net, up the side boards..waits...waits..shoots and scores! 2-1 Canucks! Where is the Oilers' game? Christ they suck ass right now! Love it!
Shots are 32-15 Canucks with 5 minutes left. Are the Oilers going to surge?
----------
The Canucks continue their stellar defensive play in the 3rd, clogging up the neutral zone and waiting for chances. The Oilers have NO speed game here. Luongo must be bored! This is such a composed Canucks team. Yeesh! Oilers pull their goalie and generate NOTHING offensively. A near perfect game played by the Canucks.
Oilers get all frustrated after the buzzer sounds to end the game, acting like a bunch of pussies, and this one is over!!!
Be forewarned though, the Oilers will be a different team at home.
The Canucks got scoring and better outings from their 2nd and 3rd lines tonight! Praise Jeeziz! Canucks were good in the faceoff circle as well, winning 32 faceoffs. Oilers only won 23.

Zany's goats:
No Canucks on this night. But the whole Oiler team are the goats tonight minus Roloson. Even when the Oilers tried to penetrate the Nucks' zone tonight when they were down a goal, they were too pretty with the puck, and really did nothing! Pathetic!