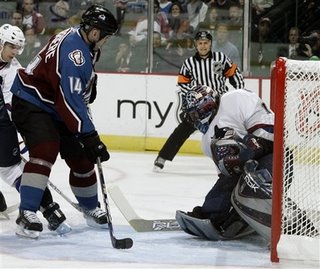 I'll try to stay on top of this one as much as possible. It should be a great game, as this is a rivalry! Predictions? I'll say 3-2 Canucks.
DANIEL SEDIN SCORES! The Avs had just killed off a penalty when Naslund, Krajicek and Danel Sedin barrel into the Avs' zone. Naslund wrists it towards the net, Krajicek tips it, Theodore stops it but lets out a rebound. And there was D Sedin to bury it!
Avs finally get a shot on goal about 7 minutes in. Just when they look like they are going to get going, Svatos gets an elbowing call (elbowed Mitchell, who looked like he wanted to pound his head in!)
Josh Green takes the Canucks' 3rd penalty of the period, and Wolski bags one after multiple chances for the Avs to score in front of the net. Its like the Nucks were watching Luongo make save after save...
And that behaviour continued until the end of the 1st. After the Canucks were outshooting the Avs 5-0, the Avs then went on about a 12-2 run on shots.
One thing very noticeable is that the Avalanche are a much quicker team than Vancouver. They used that speed to dominate the Nucks offensively during the last half of the 1st. But there was Luongo to make super saves to keep the Canucks in it.
---------------
The 2nd period, for the most part, was all Avalanche, due in part to their speed, and the Canucks being short-handed for almost 1/2 the period. At 17:00, Fitzpatrick took a needless penalty in front of his net. On the Avs PP, Sakic looked like Gretzky behind the Nucks' net and he centered a pass in front, where Svatos had 2 whacks at it and scored. 2-1 Avs. The Avs are really putting guys in front of Luongo and trying to cram the puck in.
The next 12 minutes or so is all Avs in the Nucks zone. But there was not too many great chances. In fact, it was boring.
With under a minute left the Canucks storm the Avs zone for the first time in a long time and score!! Naslund scores a rebound goal from Hank Sedin and Willie Mitchell.
Seconds later, the Avs thought they had scored, but the whistle was blown before the puck went in because of a delayed penalty to Jan Bulis. Lucky break for the Canucks. Period ends. Avs outshot the Canucks considerably in that period...about 11-1 actually. Not good.
--------------
Brendan Morrison has not played in the 3rd yet. Has he been benched?
Burrows gets tripped, Avs break in 2 0n 1, and Hejduk hits the post!
Ah..Canucks powerplay coming up....finally. Canucks still take too many penalties this season so far. Morrison is back on the ice on the PP...ah shit H Sedin gets an interference penalty...4 on 4.
How is Wolski pronounced Volski?
Sakic takes a wrister on net and Svatos scores again! uh oh, it's under review.... Canucks still aren't covering their man in front of the net. Likely story tonight. They will need to readjust this soon, because it's killing them, as is taking too many fucking penalties in the first place.
Goal stands...3-2 Avalanche, their 3rd PP goal tonight. Assisted by Sakic and Brunette.
Cooke gets high sticked, and Canucks go on the PP. They even pull Luongo for a 2-man advantage. No dice. They have no muster tonight....0-5 on the PP tonight.
Under a minute to go, Canucks pressure the Avs hard with Luongo on the bench. They buzz the Avs zone and time runs out. Avs win as Star Wars plays in the background. They really needed to win this one to stop their 2 game losing skid. Canucks weren't even in this one anyway.