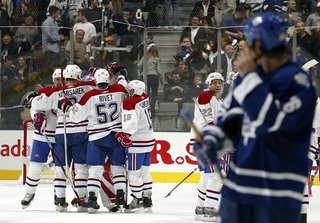 The Habs squeeked out a win over the Leafs, and it took a shootout goal from Michael Ryder to do it. It was a game that the Leafs should have won, as they were up 2-1 on a goal from Matt Stajan at 4:38 of the 2nd period, and had numerous chances to increase their lead. But they could not put anymore pucks past David Aebischer, as well they missed the net alot!
Whenever the Habs had chances to score, Andrew Raycroft would stop them, and really, they didn't have alot of 'choice' opportunities until new Hab Mike Johnson got a pass right in the slot and buried a high shot over Raycroft's shoulder at 6:44 of the 3rd. Again the Leafs had chances to win it before and even during OT on powerplays but couldn't capitalize on Aebischer, or penetrate the 'box' defense of the Habs.
The shootout was spectacular. Mats Sundin and Christopher Higgins traded goals to start. Kyle Wellwood was stopped by Aebisher, as he tried to go high glove side. Then Saku Koivu completely whiffed his deke. But the best part was that the next 3 shooters, Darcy Tucker, Alexei Kovalev, and Alexei Ponikarovsky all sequencially hit the goal post on their shots.
Michael Ryder, who had told Bob Cole before the game that he 'sucks' at shootouts, was next, and he buried a shot over Raycroft's shoulder in not-so-sucky fashion, ending the game and giving the Habs a much-needed moral booster.

Game notes:
*Jeff Oneil couldn't hit the broad side of a cow's ass with a shot. I counted 5 complete misses, and I missed about 10 of them. He made good passing plays and played well defensively, probably the only thing saving his carcass from the minors at this point.
*Hal Gill seems to be settling down and didn't look so treacherous.
*Mats Sundin is a better player than Koivu. He was everywhere tonight.
*When Kovalev sucks it, he really sucks it! He looked uninspired.
*Playbook on Raycroft:shoot high every time. He goes down every chance he can get, and he leaves a huge part of the top part of the net open. It's too bad.
*Don Cherry raved about Kyle Wellwood on Coach's Corner, and I agree. Wellwood is tha bomb. Hop he keeps up his great play.
*Final shots: Leafs 40 Canadiens 35...wow! Good game! Bad result!