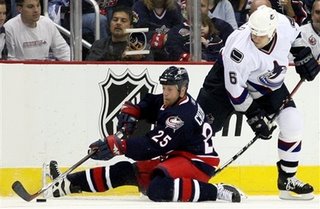 I'm stuck at work, but I am listening to the game on the radio. Missed the 1st period...dang!
......
At this point, the Canucks have outshot the Jackets 17-10. After a slower 1st period for the Nucks, they have outshot the BJ's 8-0 4 minutes in the 2nd so far. Pascal Leclair is playing well for Columbus.
So now we'll see how the Canucks are at coming back from being down a goal, for the 1st time this young season.
Geez, the shots are 11-0 for the Nucks in the 2nd. Leclair has never had a shutout in the NHL...
It took the Jackets almost 12 minutes to get a shot on goal. According to Shorthouse, most of the Canucks' shots are going into Leclair's 'breadbasket.'

Canucks are going on the PP with Modin going off. (7:00)
Canucks generated NO chances on that PP.

Damn, Fitzpatrick trips a streaking Nash, penalty!
Oh no, and Ohlund clears the puck over the glass and gets a delay of game penalty...2 men down!
Watch Anson Carter bag one....
Oh shit, Krajicek just got a hooking penalty, and the Canucks are down 2 men forever.

Vyborny gets a flukey one, and it's 2-0 Jackets. (from Hartigan and Nash)
Still a 2-man advantage for Columbus b/c of Krajicek...
The Jackets buzz the Nucks zone, but don't score anymore PP goals.

With 5 seconds left, Hank and Markus break in 2 on 1, and Leclair stones Henrik.
-----------
At about the 12:00 mark, Leclair stones Cooke twice, and then stops a deflected shot by Daniel Sedin. Canucks have 31 shots now. Larschied and Shorty are saying 'shutout' and 'goose egg' to curse Leclair's possible shootout.

Canucks go on the PP with 9:54 left. Gotta score quick.

Canucks are pressing with 5:00 left.
Daniel Sedin SCORES!!!!! Naslund fed him a beauty backhand pass! 2-2! Larschied has a damn stroke!

And now the Jackets start pressing right after the goal. Intense action. Now the Canucks are pressing with under a minute left. But nothing doing, OT is coming up!
I think the Canucks have outshot the Jackets 42-20 so far! Crikes!
---------
HOLY HELL! DANIEL SEDIN SCORES AFTER A WRAPAROUND ATTEMPT FROM HENRIK! Canucks take this one 3-2! Nice try, Columbus. You blew it!