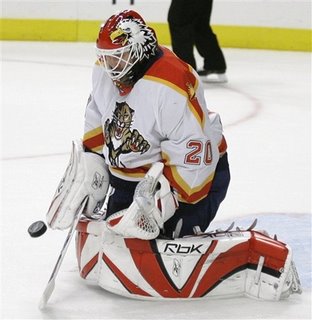 After the Panthers' win over the Rangers, Eddie The Eagle said he is feeling more comfortable between the pipes.

"I'm starting to get in my groove," Belfour said. "My timing is better and I'm seeing the puck much better. We definitely needed this win."


Belfour stopped 35 of 37 Rangers shots, in a game that the Panthers took 6 penalties to the Rangers' 2. Belfour is now 2-2-0 with a not-so sparkling 3.06 goals against average, and a less than stellar .893 save percentage.
If Belfour can regain his form to how he was playing in Toronto a couple of years back, and even at periods last season, his numbers will improve, and the Panthers will start winning alot more consistently.
At 41 years of age, alot of skeptics are saying he is done. I am saying he still has something to offer, provided his back holds up. Belfour is alot like Gary Roberts. He is a fierce competitor and will do anything short of killing someone to keep his back in good shape.
Perhaps the biggest issue will be how he reacts to sharing alot of the load with Alex Auld. I'm pretty sure that Eddie believes in his own mind that he can handle playing 50 or more games. I'm not sure coach Jacques Martin will allow that. But you have to wonder if Belfour is able to stay sharp when he doesn't play as many games. He has always played large amounts of games per season his whole career. If Martin cuts back his playing time, will Belfour become disillusioned? Angered? Drunk? Disorderly? Psychotic?