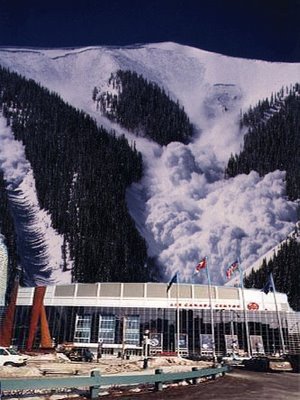 Should be a great one. The Avalanche don't have much thunder so far this year with a 1-2-2 record. They lost their last game to the not-so shitty anymore Black Hawks 5-3. A big question for the Avs will be how well Jose Theodore can handle a team that has the most shots in the NHL.
The Leafs look sharp with a 3-1-2 record winning the last game over the Flames in Sundinian fashion. That was over 4 days ago, so there could be some rust. As long as Raycroft can hold them in there until the rust wears off, this should be a win for the Leafs.
Zanstorm's prediction..
5-2 Leafs. It wasn't an avalanche that hit the ACC, it was only whiff of snow.
-----------------
Period 1
The Leafs strike early (2:22) on a goal from Bates Battaglia (still one of the best names ever!) From that point it was all Avalanche, who outshot the Leafs 10-5 in period 1. It really should be at least 3-1 Avs right now, but Andrew Raycroft is playing an outstanding game. Only Brett McLean, a BC boy, could solve Raycroft, after the Leaf goalie made 2 great saves, and the Leaf defence was standing around. Leafs look a little sloppy and rusty, especially Jay Harrison and Ian White on defence. They are turning over the puck and losing battles in their own zone.

2nd and 3rd periods
This really wasn't typical of what we've seen from TO this year. They were outworked and outskilled, and the Avalanche looked like they all injected a bag of crack before the show. They were skating circles around the Leafs, and moved the puck around to near perfection. It really seemed like the Leafs didn't have many quality chances on their 28 shots. When they did, Peter Budaj was solid in net.
Personally, I think this kind of game is something we should see alot more of from the Avalanche this year. Obviously the lackluster play of Theodore hasn't helped them to this point.
The Leaf fans at the ACC boo'ed the losing team off the ice tonight. Quite the contrast from Saturday night.