Another Staal in the NHL

Share All sharing options for: Another Staal in the NHL 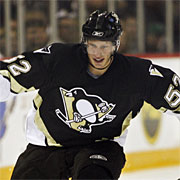 Thanks to his skilled hands, long reach, and effective penalty-killing, 18 year-old Jordan Staal will stay with the Penguins and sign a 3-year entry level contract.

"Jordan has earned a spot on our roster," Penguins general manager Ray
Shero said in a release. "We all knew about his skill level when we drafted him,
but his work ethic, maturity and consistent effort have enabled him to make what
normally is a difficult transition for a teenager."


Staal already looked brilliant in preseason, and has carried his great play into the first 9 games of the regular season. The Penguins were forced to make this decision on Staal before he plays his 10th game. Their other option was to send him back down to the Peterborough Petes if he didn't seem mature enough to stick in the NHL.
I think that Staal is fortunate that the Penguins are such a young team. It helped his chances.
Anyone else admiring and enjoying the Penguins' 6-3 start? Last season they started off on a nine- game losing skid. But the arrival of Malkin has only solidified this teams' chances of success long term, and as it seems, short term as well.
Staal is currently 8th in team scoring with 4 goals and 1 assist in 9 games. He is also a +1.
So this entitles the Penguins to pay Staal $850,00 does it not?