WARNING: Objects in the rear view mirror are closer than they appear

Share All sharing options for: WARNING: Objects in the rear view mirror are closer than they appear 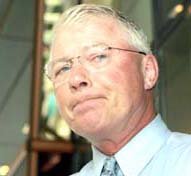 On the one hand, you can view Clarke as a smart guy. A guy who realizes he is about to lose one fatted cow and, after unsuccessful attempts to land Kesler earlier this summer, thought this was the perfect time to try and pry away a player from the Canucks (which, in Clarke-speak, means "my personal AHL team"). Or maybe he wanted to squeeze the Canucks out of any potential resurrection of an Anson Carter deal. Or maybe Dave Nonis wronged him in a previous life and he’s waited (ever so patiently) until right now to get him back…cosmic paybacks, as you know, are quite the royal bitch.

On the other hand though, you can’t help but be angry at both sides here. First, we have Nonis who flirted with this very scenario all summer (as has every NHL GM who had a group two player holding out). You could argue Nonis paid a bit too much in previous contracts to Morrison, Cooke, the Sedins, or Mitchell and created this problem himself. Yet, on the other hand, you have Clarke who just tried to steal a player away from a fellow GM. Clarke is obviously entitled to do this, but you have to wonder what precedent he just set (to speak nothing of the fact he finger fucked around with Gagne all summer only to turn around and offer Kesler, a statistical inferior, nearly a third of the Gagne’s new contract). In one swipe of the pen, Clarke just made negotiating with group two hold outs much more precarious. Not to mention that, unless he bends to the wishes of their agents quickly, Clarke himself will find himself in the same position with Kyle Calder, Jeff Carter, Antero Niittymaki, Joni Pitkanen, Mike Richards and R.J. Umberger in the coming seasons.

Cosmic paybacks. QUITE the bitch.