VOKOUN TO GET CONTRACT EXTENSION

Share All sharing options for: VOKOUN TO GET CONTRACT EXTENSION 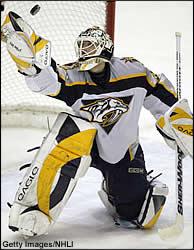 It is expected that the Nashville Predators will announce the signing of goaltender Tomas Vokoun this afternoon. The Tennesean newspaper reports that it will be a 4-year deal. Vokoun is currently under contract for $2.28 million and was to become a free agent next summer.
Vokoun had a career year last season with 36 wins, a 2.67 goals against average and a .919 save percentage. The Predators floundered without him in the playoffs last season after he missed time because of blood clotting in his abdomen. Now Vokoun is healthy, and this is a great sign for the Preds who look to have another stellar season and push for a Cup run.
Details of how much Vokoun will make over 4 years will be released this afternoon I'm sure.
Now expect Dan Hamhuis to get a deal within the next week.
****IT IS A 4-YEAR, $22.8 MILLION CONTRACT. That is the 3rd highest goalie salary in the NHL!!****