SVATOS GETS A 1-YEAR DEAL

Share All sharing options for: SVATOS GETS A 1-YEAR DEAL 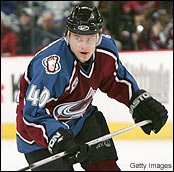 The terms of the deal have not been released yet. This was obviously a huge signing for Colorado, as Svatos plays a prominent role up front, and will be counted on even more with the departure of Alex Tanguay.
"Marek played a key role in the team's success last season," said Avalanche Executive Vice President and General Manager Francois Giguere. "He had an outstanding year and scored several key goals. Along with Alex Ovechkin, Dion Phaneuf and Sidney Crosby, Svatos was a part of the outstanding and exciting new brand of NHL players that made their debut last year. We are expecting him to be a huge offensive contributor to our team again this season."

The 24 year old Svatos had 32 goals and 18 assists in 61 games last season, before injuring his shoulder and missing the rest of the season. The Slovak should have an even better season this year.

MORE SIGNINGS:
The Flames have signed Russian defect Andrei Taratukhin to a 2-year entry level contract. The 23 year-old was the Flames' second round choice in the 2001 entry draft.

The Oilers have signed F Alexei Mikhnov and D Mathieu Roy to 1-year contracts. The 24 year-old Mikhnov will make the club this year. Roy will be on the brink.