Share All sharing options for: PRONGER SPEAKS / OTHER NEWS 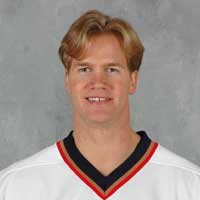 Duck Chris Pronger is tired of all the chatter about why he left the Oilers. So he spoke in an Edmonton newspaper.
"I've heard all the nasty stuff, about all my girlfriends...that I've got more kids than I started with. I must have six kids out there.
It started off with I slept with so-and-so, and I'm having kids, then it moved to my wife sleeping with some of my teammates. I was supposed to be having a kid with a reporter, then she said, 'I don't know what they're talking about.' Then it went from story to story.
The fans have every right to feel how they feel. Some understand, some don't care. Others, I'm sure, want to tell me to screw off.
Fans are fickle...it's the nature of the beast. You're an idol when you're on their team. They love to hate you, hate to love you. Now, they'll be back hating me. They always did when I was on other teams."
Oh yes they will hate you. You will be boo'd so loud in Edmonton that even Todd Bertuzzi will feel good about himself!
***
Sergei Federov will be out of the Blue Jackets lineup for about 4-6 weeks after apparently seperating his shoulder last night during a preseason game. Not really what the Jackets needed to start their season.