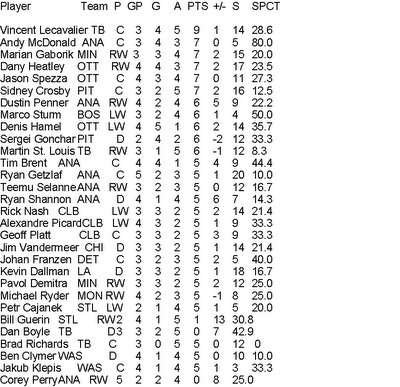 Preseason or not, I still enjoy stats, and I don't mind analyzing them to some degree, keeping in mind varying factors.
One intriguing stat is that there are 7 Duck players in the top 30 scoring leaders. The Ducks collectively have scored alot of goals so far. I like seeing Dustin Penner that high up, because he could turn into a terrific power forward in the NHL. I think that 70 points for him is realistic this year.
As long as Teemu Selanne is playing, Andy McDonald will have over 80 points in a season as they will have top line duty obviously.
I like how Martin St. Louis has 6 points in 3 games, and could very well improve over last year's disappointing 61 points in 80 games. He already looks like he is going to put that behind him, which is good because I have him in my pool!
The other glaring stat to me is Bill Guerin, who has 5 points in 2 games. Guerin is out of Dallas, where he was unmotivated, and he really didn't want to be there. He now plays with fellow Americans Doug Weight and Keith Tkachuk on the Blues top line. I've said it before, I think Guerin (barring any injuries) will have one of the biggest point increases this season compared to last year, even given his age. He has played with Weight before, as Edmonton fans can attest to.

Other than that, please excuse my lousy layout of the stats as I am not good at the concept yet!