Share All sharing options for: NEW START FOR STEFAN 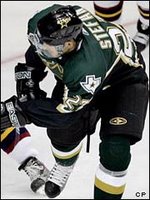 Being from the west coast, I haven't really had much of a chance to see Patrik Stefan play. Apparently I haven't missed much. His best season, (and the only time he played a full season) was in 03/04, where he had 14 goals and 40 points. The former #1 overall pick by Atlanta in 1999 will get a chance to show his NHL skills in a new city this season, a city that is expecting more out of him. But how much icetime will he get in Dallas? The Czech center may get lost in the Stars' depth at center, behind Mike Modano and the also newly acquired Eric Lindros.
At Stefan's $900,000 price, he will probably play a checking role on Dallas' third line until Lindros hits his head on something. Then again, judging by Stefan's track record for injuries, the Stars had better hope nothing touches Stefan either.