Share All sharing options for: MALKIN UPDATE / BURKE ON WAIVERS

Thankfully, injured rookie Evgeni Malkin will not need surgery on his shoulder, and will miss about 6 weeks of action. This could add up to about 10 or 11 games. Hopefully he doesn't play on John Leclair's line when he returns! 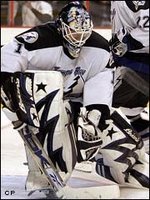 Sean Burke has been put on waivers by the Tampa Bay Lightning, according to TSN. The 39-year old has about run out of options to play in the NHL unless there is a serious injury to another team's goaltender sometime during the season. He had a subpar season last year posting a 2.80 goals against average, and a .895 save percentage. All this at a $1.6 million price tag. So in my opinion, count on Burke retiring from the NHL soon.
Did you know that the Lightning was the 9th team that Burke has played for in the NHL? His best season was in 2001-02 with the Phoenix Coyotes. He played 60 games, had 33 wins, 26 losses, 5 shutouts, a .920 save percentage, and a 2.29 goals against average.