Share All sharing options for: LUONGO IS GOOD, BUT NUCKS NEED OFFENCE 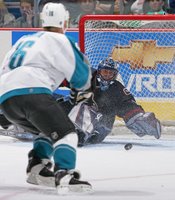 Yeah yeah, I know it's only preseason, but the Canucks' loss to the Sharks tonight (2-0) does raise an interesting question that has been brought up alot this offseason. How many goals will the Canucks score? Will it be enough? I think we are already getting glimpses into how the early part of the season (at least) will go for them already. And that is that Roberto Luongo will not disappoint, but unfortunately, he is stuck with some of the problems that he had in Florida, which is GOALS SCORED. Now....who do you envision being on the top line this season?
Should it be Naslund-Morrison-Bulis, and Sedin-Sedin-Kesler on the second line? I can feel that.
But the truth is, Jan Bulis is nothing but a pipe dream to score 60 points even. Kesler is the same, unless he suprises. So what the Canucks are probably going to have to do is play better defensive hockey, and get scoring from all FOUR lines. If that isn't the case now, then they will have to aim for that in the near future. Naslund will be gonzo next season, unless he puts out more than 75 points, as his $6 million salary dictates. And we will wait and see what players like Marc Chouinard and Taylor Pyatt have to offer offensively as well.
The bottom line Canuck fans, is that it is a roll-of-the-dice season, so I hope you have alot of money in your booze account because you just may need it.