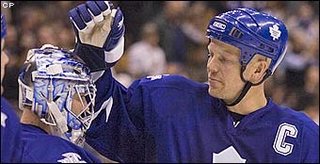 The Leafs continue to cruise through the preseason with a 5-1 victory over the rival Canadiens. Mats Sundin, Darcy Tucker, Aleksander Suglobov, Alexei Ponikarovsky, and John Pohl tallied for the Buds. Suglobov scored an absolute beauty, deking goalie Yan Danis out of his space boots and roofing the puck quickly. (Pope) John Pohl had a strong game for the Leafs and continues to impress.
But the big story was Leaf goaltender J.S. Aubin who stopped 22 shots and really had a hell of a game. Aubin continues to make it tough on the Leaf brass to decide who will back up Andrew Raycroft. Then again, the Leafs lost their only game with Raycroft in net, while Aubin and Mikael Tellqvist have had stellar outings. To that I say...GOOD! Maybe the Leafs won't have goalie woes after all, as they have options.
Aubin played so well at the end of last season when Belfour was out and the Leafs made a late season dash for the playoffs. He doesn't seem to be letting up.

Hey, what was the score of the Canucks game tonight? Anyone know? Was it close? Didn't think so!