Share All sharing options for: King and Carter bring their drama elsewhere 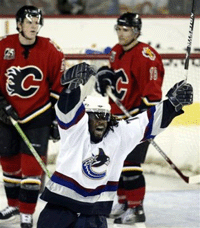 As Dave Nonis still shakes out the couch cushions looking for that pesky $1.9 million to keep Kesler from the crypt-keeper-esque grasp of Bob Clarke, the soap opera that is the Canucks off-season closed two more chapters yesterday.

First, prospect camp hold out and former rookie of the month Jason King has run off to Sweden rather then battle it out for a slot on the Canucks roster. It appears his fear was what his salary would be if he was sent back to the AHL, so without an answer that made his agent smile, King will bring his show to Skelleftea of the Swedish Elite League.

And perennial rental player Anson Carter, who could have stayed in Vancouver for roughly the same amount of money it seems Kesler will be making next season, decided life would be better in the Midwest (boy, is he in for a shocker) and inked a one year deal with the Blue Jackets. The question now is: did the Sedins make Anson Carter or vice versa? The Blue Jackets sure look nice on paper with Nash, Fedorov, Vyborny and Modin but then again their defense is suspect, goaltending questionable and take a look at the plus/minus for their top lines last year and it sure seemed like a long year. Tell you what…if Carter gets more points on the Blue Jackets then he did with the Sedins, I’ll eat a brick. Good riddance.

Then again, this is Salary Cap 101 folks, it’s a zero sum game now.