Share All sharing options for: Kick the Pig: The 2006-07 Vancouver Canucks 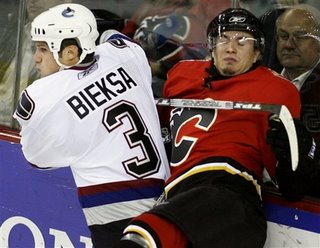 It's about that time of the year again. The weather in NYC is moving from the summer balmy/gross combo over to the fall cold/gross combo (the smell of urine, however, is always strong enough to defy weather conditions)...the NBA is no where to be seen (as nature intended)...local fans are trying to figure out which futile NFL franchise to anchor their allegiances to...the Yankees and their red-headed bastard stepchild Mets are forging ahead into the baseball postseason...yeah, it's about that time for some hockey.

Many folks and media outlets are getting their editorial fix on by throwing every preview, review and throw a dart in dark guess at what the upcoming NHL season will feature. I've voiced my opinion of senseless reviews previously, so I'm sure as hell not reviewing the entire league. Or conference. Or even the Northwest Division entirely.

Rewind to last spring: it was late March/early April and the Canucks, who occupied first place in the division just after the Olympic break, had taken the mother of all plunges and became their own worst enemy. They could not score, they gave up early leads almost nightly, their defense was highly suspect and their team chemistry (like my own chemistry grades in high school) was outright atrocious. The trade deadline came and they throw prospects and picks at their weaknesses and received back four players who were complete non-factors and are not around anymore. They missed the playoffs, played their final game, did the whole jersey off the back thing, said everything politically correct at the post-season interviews about the need for change and time to reflect...blah blah blah. (Meanwhile, the fans...you know, the ones who pay these people's salaries? We watched yet another Northwest dark horse steamroll itself to within 60 minutes of the Cup. Sigh.) 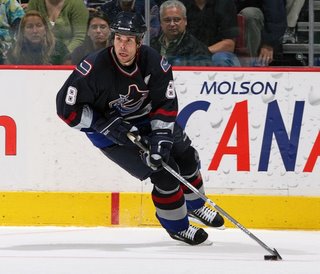 Dave Nonis said changes were coming. Yours truly doubted him and figured a minor change here and there and we'd be back next season with the same mix. Nonis proved me wrong. In fact, he proved almost everyone wrong.

Talk about change...Nonis basically jammed a stick of dynamite in the core of the squad that was formed originally way back in the wacky and laughable Keenan/Messier era, took a step back, pushed the big red button and blew the entire concept up. It's not just the names and coach, it's the entire identity of the Canucks...namely: run and gun & WCE out, responsibility and a defensive-oriented mentality in.

On paper, you can see what people (like that smirking clown Pierre McGuire did on his 6 Cities In 6 Nights piece) think Vancouver is going to be blown off the NHL map on a nightly basis. That's a fair comment; certainly the preseason - which means precisely NOTHING - hasn't been kind to Vancouver and given their critics a reason to shut up. Then again, they are icing more AHL than NHL-caliber teams on a nightly basis. But regardless, let’s look at the criticism:

The defense: It hurts to have Jovocop and Allen's big body gone. Mitchell is an upgrade for Allen but not a replacement for Jovanovski. If anyone is going to fill that slot, it's going to have to be a combination of Ohlund and Salo, the latter of whom has a complete rocket of a shot when/if he’s healthy. And what of the rest? Krajicek, Fitzpatrick, Bourdon, Bieksa? It's anyone's guess still who fits the 4-7 slots. Consider the D an evolutionary project that will take the first quarter of the season to become more clear. But, with so many questions marks, that MUST be a bad thing. Grade? F!

The offense: On paper, the points produced by Bertuzzi & Carter are going to be replaced by Chouinard, Bulis and Pyatt? Not likely. Who's the number one right winger? For that matter who is the number two right winger? Will the Sedins sink or swim without Anson? Will Kesler play up to his bloated salary? Will guys like Linden and Burrows provide the spark needed from a third and fourth line? With Pyatt stay health? Will Chouinard actually win a face off? Above all, can this group score at all with anyone not named Naslund or Sedin? Survey says….NO! Grade? F! 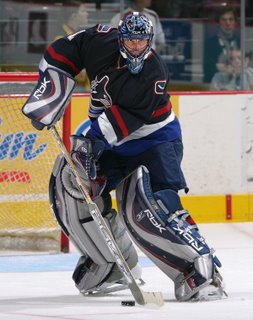 All doom and gloom (hell, visit the official Canucks forum if you need more reason to reach for the whiskey bottle before 10:00 AM). But, how about we try and view this from a more constructive standpoint? Goaltending, broadly speaking, is no longer an issue. Sure, Luongo may shit the bed from time to time, but he'll be able to steal games in a way that Cloutier & Auld simply couldn't. Not to mention it's a boost to the team to know they have a rock and not a sieve in net.

The defense will come together because, well, it has to (I know, that’s sound scientific logic). Vigneault’s paycheck is directly tied to his ability to mold his core guys to be an extension of the responsible defense that begins with Luongo (note: I didn't say trap...not yet!). Will they be the best D in the division? Hell no, but they don't need to be…they need to be effective and responsible. And there's more of a chance of that happening with this squad and coach then there EVER was with Crawford and company in tow. Guys like Ohlund, Salo, Mitchell and ideally Krajicek will be that core.

The offense will also come together. Will the Canucks get shut out from time to
time? Probably. Will they score five goals a game like all fans assumed the old core could nightly? Maybe, but probably not. Yet this isn't a squad that opposing teams can simply take a night off on: Naslund is working on seven straight 70+ point seasons, the Sedins spent the summer playing catch with friggin boulders in Sweden and are in the best shape of their lives, Bulis is coming off a career year in which he was used sparingly on the fourth line in Montreal, Pyatt has been solid in preseason play (but his myspace page scares the hell out of me – h/t Orland Kurtenblog), Cooke will likely blame the same crash and bang style he has been for years, Kesler is slowly being groomed into the first line center we never had, a rejuvinated Linden is hardly a bad thing, and Chouinard gives us depth down to the fourth line.

Also, keep in mind that while losing Allen, Bertuzzi & Ruutu hurts, it also means we have shed our top three PIM guys from last year. If Vigneault gets this team playing as a unit and not as a team of individual puck hogs, that too will play in their favor.

The bottom line? This team transition was necessary. If we sat here still looking at Crawford, Bert, Jovo et all we'd be saying the same thing we'd been saying for years, "Maybe this is the year their collective head will be removed from their ass and they'll play as well as they do when I control them when I play NHL 2K6!" Nonis, however, doesn't have that luxury. He needed to get Crawford out and Bertuzzi's baggage moved. The salary cap handcuffed him from keeping Jovanovski and Carter. And he needed to remold this team without scuttling it entirely and pissing off the entire fan base. He did just that.

In response, we fans need to be patient (I know, sucks huh?). Most NHL teams have a few changes here and there during the offseason...the Canucks need damn name tags coupled with learning to pronounce ‘Vigneault’ and, more importantly, learning to play his style. But when that clicks, when the team begins to produce as expected, this will become a team that will give other teams headaches and frustrate them night after night. But it will take time and the on-ice product itself will look and, naturally, "feel" different. But what do you want? The bang and crash style from before that gives up early goals, takes inane penalties, and too frequently disappoints or do you want a change, a coach and a system that can be capable of producing the same lofty expectations of playoff success we all have been craving? We’ve done the former for years now, so I choose the latter.

Three years ago, an unknown Calgary squad landed a top notch goalie, bought into the Sutter style of play, and pushed themselves to the cusp of greatness. Last year Edmonton acquired a serviceable goalie, played as MacTavish demanded, and shocked the entire league with their effectiveness and heart. If you go back and look, neither the 2003-04 Flames or the 2005-06 Oilers were projected to be good teams period much less be Cup contenders. So keep that in mind when TSN, Fox, Sports Illustrated, ESPN and whoever else starts telling you Vancouver may as well sit this season out.

Enough analysis. Let's kick this pig: drop the damn puck and get this show going. 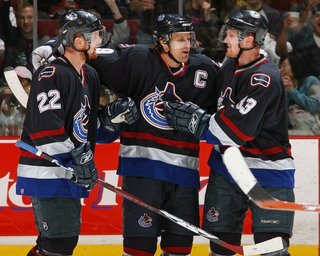 UPDATE: ESPN posted their Northwest preview this afternoon. As expected, the Canucks in 9th and to miss the playoffs. Shocking. They also pick everyone's favorite team, the Flames, to come in 7th. And the Oilers to finish in 6th? The Avs drop out completely and the Wild, of all teams, come in 3rd so they win the division? Wow, I have so much hate for this "preview" I don't know where to start...likely it'll be with the trusty Jack bottle.