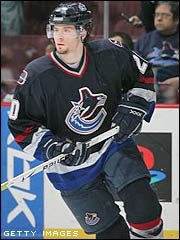 According to the Vancouver Sun, Ryan Kesler will play on the Canucks third line this season with Alex Burrows, as Alain Vigneault really likes how they play together.
"Those two guys seem to be clicking well together," Vigneault said. "Now we need to find another forward to complement them. Those two tonight were as close as the Sedins have been." (referring to last night's game in Edmonton.
The third forward on that line is unknown. Any guesses? It may not be Marc Chouinard, as coach Vigneault is not pleased with him.
"I thought he was marginally better, but he is going to have to be a lot more effective," Vigneault said. "I haven't seen him in the past, but what people are telling me is he is a much better player than what he has shown so far."
This is why it's a good thing that there are so may preseason games, especially for the Canucks, who still have to make alot of lineup decisions.
Kesler playing on the third line is a bit of a suprise considering the $1.9 million he will make this season. Many, including myself, thought he would play a larger offensive role at those dollar figures. This could mean that Matt Cooke could play on the second line, and Jan Bulis will play on the first line with Morrison and Naslund.
...........
The Canucks have made more cuts. Right wingers Tyler Bouk, Mike Brown, Lee Goren, Michael Grabner and Jesse Schultz, as well as center Brandon Reid, and defencemen Alexander Edler, Norm McIver, Yannik Tremblay, and goalie Drew McIntyre. The most unfortunate cuts are Grabner and Schultz who almost look ready to make the jump to the NHL. But Vigneault isn't impressed with Schultz.
"In Schultz's case, I don't know what happened," Vigneault said. "I thought he had a chance and he just didn't play well enough. I know he is a much better player than what he has shown so far."
Who Vigneault really does like is kid defenseman Patrick Coulombe.
"I'm really liking that Coulombe kid," Vigneault said. "He's competing hard and making the right plays with the puck. He's really good on the power play."