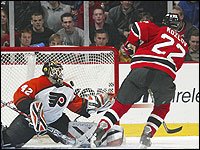 The Isles have signed Kozlov to a 1-year $865,000 contract according to their homepage. Kozlov had 25 points in 69 games for the Devils last season. His best season was in 1999-2000 with the Panthers (70 points in 80 games.) Since then he has been inconsistent and has not materialized into what was expected of him. In fact, 25 points is almost par for the course for Kozlov.
I'm curious to see what kind of money the Isles will be paying him. Given their track record in the last 24 hours, my guess is they will overpay him!

The Islanders have invited Mike Dunham and Richard Park to their training camp. Reports state that Dunham will back up Dipietro this season, and then challenge Snow for the GM spot.

And speaking of Dipietro, I like what one GM said about his contract. The unnamed GM wondered what the hell will motivate the goaltender to become even better, since he already makes $4.5 million. This could turn out to be the bottom line. I like the deal IF Dipietro improves to become a top 5 goalie and the Isles will only pay him $4.5. But how long will Dipietro play top 5 - calibre hockey at that price before he sulks that he's being underpaid?
Good luck, Wangnut and Garth Dope.