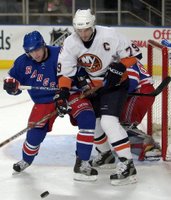 The Islanders are such an easy bunch to pick on and throw insults at this year. With the bogus Dipietro signing, the ongoing Yashin contract, a guy named Satan, the backup goalie/GM, Mike 'Fricking' Milbury, and the WangNut who owns them, this is potentially a joke team...right?
Well beyond the madness, there lies a decent team on paper. A team who nobody is picking to go anywhere this year. But after watching the Islanders/Rangers preseason game tonight, I snapped back into reality a touch. The Isles boast a good nucleus of youth. Chris Campoli, Jason Blake, and Shawn Bates especially were everywhere tonight. They boast soft hands to go with their speed. The new NHL is bringing out the best in them.
I don't know if Viktor Kozlov and Tom Poti are going to cause grey hairs on Long Island, but the acquisitions of veterans Mike Sillinger, Brendan Witt, Sean Hill, and Chris Simon should provide some leadership for the young guys, as well as chip in considerably.
Ted Nolan, as scarred as his reputation may be, is a coach who can get the most out of his players. I wonder how Yashin and Satan will perform under his coaching. Don't forget, Ted Nolan turned the Sabres into a somebody during the 1999 playoffs, and they went right to the Stanley Cup Finals.
I saw something interesting after the Islanders schooled the Rangers tonight. Alexei Yashin turned around and shook Ted Nolan and the rest of the coaching staff's hands. That means he cares at least, and was a nice gesture.
Don't get me wrong, I am not an Islanders fan. But the last thing I want is for their legacy to be tarnished by madness. Hopefully they can at least be competitive in the tough Atlantic division and not disgrace themselves. On paper, this team should AT LEAST be competent of that!