Share All sharing options for: HABS DEAL RIBEIRO TO STARS FOR NIINIMAA 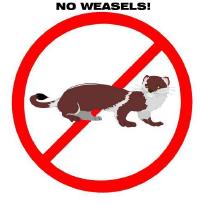 As Charles Teljour might put it, the Spineless Hab Weasel (Ribeiro Fakus Maximus) and a 6th round pick in '08 has been dealt to Dallas for (Can I buy a vowel?) Janne Niinimaa and a 5th round pick in '07.
Ribeiro and Niinimaa had disappointing seasons last year. Ribeiro was not impressing the Canadiens' coaching staff and during this preseason. Niinimaa was being benched by the Stars late last year. So it really is more of a change of scenery for both that may help them, with the Habs absorbing $600,000 more cap spenditure on Niinimaa, who is worth $2.508 million.....ouch. For that price he had better not be, as Temujin would say, a s**t-at-home-type defenceman!
The Stars really didn't need any more D anyways,especially with the additions of Darryl Sydor and Jaroslav Modry in the offseason. So Ribero will give them even better depth at center.