FLYERS GIVE RYAN KESLER AN OFFER

Share All sharing options for: FLYERS GIVE RYAN KESLER AN OFFER 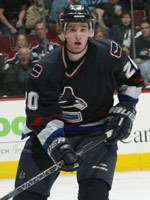 Hat tip to Earl Sleek for this story.
The Flyers have offered restricted free agent Ryan Kesler a 1-year, $1.9 million deal. The Canucks now have 7 days to match it. If they decide not to, they will get a 2nd round pick from the Flyers in compensation.
Can you see where this is heading? Kesler will probably go to the Flyers at that price, as Clarke may have outbid Nonis for Kesler's services.

UPDATE*** TSN is reporting that the Canucks DO plan on matching Bobby Clarke's offer to Kesler. Dave Nonis is not commenting on the issue, but someone from the Canucks organization is saying that the Nucks will hold a press conference about the matter on Wednesday.
Wow, I thought Clarke was going to get away with this one. This kind of a 'cheap shot' by a GM hasn't happened since 1998 when the Hurricanes tried to pry Sergei Federov away from the Red Wings. The Wings matched the offer.
Unfortunately, if the Canucks do match, not only does Kesler get overpaid, it also puts them in a tougher spot under the cap.
_________________________________________

Keith Primeau may announce his retirement this weekend, according to many reports. It is believed that Bobby Clarke was trying to sign Kesler as a replacement for the retiring Primeau.
Wow, what a busy day for hockey news....love it!