DOES GAGNE HAVE A BIT OF CARTER SYNDROME?

Share All sharing options for: DOES GAGNE HAVE A BIT OF CARTER SYNDROME? 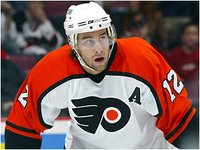 Gagne is a good player no doubt. But there is something that should be taken into consideration as far as his contract status is concerned.
According to TSN:
Earlier in the off-season, another Bob Sauve client, Alex Tanguay inked a three-year deal with the Calgary Flames with an average yearly salary of $5.25 million.

Gagne is reportedly asking for $5 million to $6 million a year.

Is Gagne worth that much? Sure, he is worth it from last year's 42 goal-79 points totals. But Gagne never had a great season before Peter Forsberg arrived. In fact, he was getting worse. Here are the numbers from the Internet Hockey Database (bless their hearts)

These stats are not that stellar prior to 05-06. His playoff stats are not much higher.
So IF Bobby Clarke was perhaps taking this into consideration, then you can't blame him for stalling the negotiations and putting his foot down.
For the record, Tanguay has 400 points in 450 games, Gagne has 324 in 426 games. Why pay a player an inflated amount for ONE great season? I think a pylon could score 40 next to Forsberg, and that pylon could be named Kyle Calder this season. I think Gagne is overrated. He's Anson Carter material or just a bit more. There I said it. If I were Clarke I'd let him sit out or trade him ASAP, if there is any team willing to pay this punk what he wants.