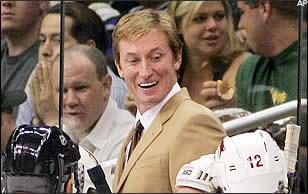 Amen! It's Friday again, so here is another Caption Contest with the Great One for anyone interested. If you aren't interested, then...get with the damn program! It's almost the weekend! Amuse yourself! (Whoa, not like that, buddy...)
The winner of last week's CC with the Thrashers wearing their hats backwards was WFS's very own Hodge! No..I'm serious! He actually had 2 captions that whooped everybody. But the best one was:

Greg DeVries: "It's working, Pronger's asking Rucchin how he learned to skate so fast backwards!"
Not bad H, not bad at all.


Have fun with this week's CC! And have a great weekend!

This post was actually composed by Zanstorm with Hodge supplying the picture.
I believe #12 in this picture is Mike Leclerc, unless someone proves me wrong. Leclerc is no longer with the Coyotes.