CANUCKS BAIL ON BERTUZZI / I REALLY DON'T LIKE STEVE MOORE 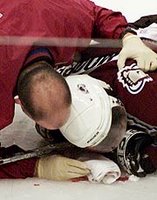 The Bertuzzi/Moore saga keeps getting worse. Now that the Canucks have traded Bertuzzi, they are 'distancing themselves' from his ordeal, according to Slam Sports, bringing about increased animosity between the the 2 parties. At the same time, Bertuzzi is expecting the Canucks to front some of the money for the awarded damages as well. Ah, the fun begins. And now to switch gears....
What really pisses me off is that Steve Moore's parents, Jack and Anna are suing for emotional damages as well. Please excuse my temper, but Jack and Anna can go f**k themselves for all I care. Greedy assh***s! Give me a break. (I feel better now)
I'm close to losing my last bit of sympathy for Steve as well. Moore is using a few quotes from Canuck players to solidify his position in this case that he was a 'target' after his hit on Naslund. Here are a few of them:

- "That kid's a piece of s---. We play them twice more and hopefully they'll keep him (in the lineup). It's called respect." (Bertuzzi)

- "There's no way that punk will be in their lineup in March." (Bertuzzi)

- At the time, teammate Brad May had said: "There's definitely a bounty on his head. Clean hit or not, that's our best player (Markus Naslund) and you respond. It's going to be fun when we get him."

- Said Jarkko Ruutu: "Down the road, there's gong to be pay-up time."

Well now I am really losing it. Either Steve Moore came up with that shit, or his cash sucking lawyer did. Either way, fuck them both. Those are statements made in the heat of the moment after the Nucks' star player was smoked by Moore. Granted, Bertuzzi did act out his threats, the other players listed didn't. If you hit a star player you are going to get retribution, Steve. Your injured neck wasn't fair, but don't start critisizing what the innocent players said just to further your case and fill your pockets. Fuck that, that is dishonorable. Their threats are a part of the game, and were warranted in my opinion, by your lack of class (by hitting Naslund.)
This is a bit off, but this goes to show that players really are better off giving cliche answers when they are interviewed, especially in a situation like this. Because anything you say will be used against you.
Honestly, I wouldn't care if Moore never played in the NHL again, even though he is trying to. What I really do care about, is that this whole situation clears up and goes away soon.