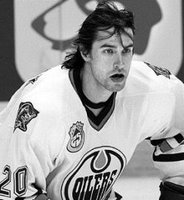 If the Blues do sign Radek Dvorak today, they have 2 pretty solid lines up front. The top 6 forwards would be:

American and Czech lines. This already should give Blues fans a reason to soon forget the dismal 05/06 season.
The Blues also added Dan Hinote this summer to shore up the 3rd line, and also acquired Manny Legace, who will solidify the goaltending position for the first time in over a season.
The same can be said about newly signed Jay McKee on defence, as well as a productive, complete season from Eric Brewer, who still hasn't found his stride in St. Louis yet.
All of a sudden the Blues don't look completely lost in the Central Division. The Blues can now compete with the likes of Detroit, Nashville, Columbus, and the piece of cake Black Hawks.
Contrary to my predictions (dammit..) the Blues could make the playoffs and be the turnaround team of the year, especially as far as a points increase goes.
Way to go, John Davidson! He must be sitting in his chair right now thinking.."Oh Baby!"

**UPDATE** The Blues have signed Dvorak to a deal today: a 1 year $1.0 million contract. Hat tip to Beaner.