Share All sharing options for: ANDREYCHUK STILL WITH LIGHTNING 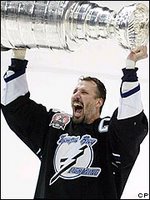 Dave Andreychuk will stay with the Lightning organization as a Community Representative. He was let go by the Lightning this past season because he was not fast enough for the new NHL, and of course because he is about 43 years old.
The Lightning will also honor Andreychuk before a game against the Sabres (the team he started his career with in 1982) on December 5th.
Andreychuk had 40 and 41 goal seasons with the Sabres during his 10 1/2 - year tenure in Buffalo. But his best season came in his first full year in Toronto during the 93/94 season. He scored 53 goals, had 46 assists on a line with Doug Gilmour. That season, the Leafs went to the Western Conference Finals, but lost to the Canucks in 5 games. The series winning goal was scored by Greg Adams, partially because of poor defensive play by Super Dave. I never forgave him for that!

Nevertheless, Andreychuk had about a 22-year career in the NHL, and was a class act all the way through. He finished his career playing a whopping 1639 games, scored 640 goals, and tallied 698 assists for 1338 points.
Andreychuk was a role player and leader with the Tampa Bay Lightning when they won the Cup, and deserved a Stanley Cup ring at the end of his career.
Good luck Dave, I forgive ya!