3 LEAFS TO BE HONORED OPENING NIGHT

Share All sharing options for: 3 LEAFS TO BE HONORED OPENING NIGHT 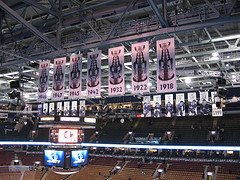 Hap Day, Red Kelley, and Borje Salming will have their banners raised on October 4th before the puck is dropped at the Leafs' home opener, according to Sportsnet.
Day was an original Maple Leaf when the team was founded in 1927. He was captain of the first Stanley Cup-winning Leafs club in 1932 five months after Maple Leaf Gardens opened , and he coached the team to five championships in the 1940s.
Kelly amassed the most playoff points of any Maple Leaf during the 1960s, when as a centre he added four Stanley Cup rings to the four he had earned as a defenceman with Detroit. He was named most gentlemanly player in the NHL four times including 1960-61 with the Leafs.
Salming was a hockey pioneer in that his move from Sweden to Canada in 1973 helped open the European talent tap to the NHL. During his 16 years with the Leafs, the agile defenceman earned enough points, 768, to sit fourth today on the club's all-time points list. He remains the all-team leader in assists with 620.

Salming was twice runnerup in voting for the NHL's best defenceman. He was named to the first all-star team once and to the second team five times.

I still don't understand why the Leafs won't retire more jersey numbers. The only numbers retired are Ace Bailey's #6, and Bill Barilko's #5. I guess the banners somewhat suffice, but it just isn't the same in my opinion.

Either way, I can't wait to see Salming especially get honored, as he is one of my all time favorites.