WHAT ANSON CARTER'S AGENT IS SAYING

Share All sharing options for: WHAT ANSON CARTER'S AGENT IS SAYING 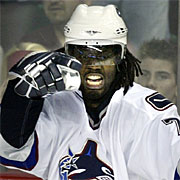 An interesting piece by Kevin Allen of USA Today...

Even though 33-goal scorer Anson Carter doesn't have a job with training camp just around the corner, he certainly doesn't see himself as being on the discount rack. "I've told everyone along the way that Anson won't be a bargain," said his agent, Pat Brisson. Brisson says the former Vancouver Canucks winger has plenty of patience, even to the point that he is willing to wait beyond the start of training camp or the regular season. "In our game there are a lot of injuries," Brisson said. "And I might get a call on Sept. 20 or Oct. 1 when a team has a player who blew out his knee, and at that point, the price may go up. I mean that Anson needs to be paid what he is worth." Carter is one of a handful of notable unrestricted free agents still unsigned and looking at an economic landscape where the majority of teams are pushing either the $44 million salary cap or the upper limits of their own budget after some aggressive summer spending.

He has a point doesn't he? It makes sense. Alot of times fans and speculators anticipate free agents to be all signed up by the beginning of training camp, but that isn't always the case. This is so true in Carter's case, as he had one significant year playing with the Sedins, and then gets an exaggerated raise.
Now most teams are close to being finished signing players, are just under the cap, and Carter has nowhere to go. It seems as though the teams that are further under the cap but are rebuilding with youth are not going to add an overpriced Carter or Dumont to their roster because they are smarter than that.
Carter is now left to a team who will be in dire need of a scorer because of an injury. Only then will someone pay his ridiculous demand. It seems as though Carter's desire for a long term contract really isn't going to happen this season. Then again, he may not play in the NHL at all this season.