Share All sharing options for: TALES FROM DON CHERRY #2 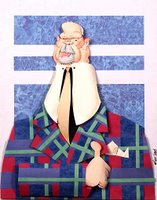 I'm sure alot of you have heard this story before. It's a story Cherry will tell over and over again about his goalie, Hardy Astrom, while he was coach of the Colorado Rockies.

"They paid him (Astrom) $40,000 more than Barry Beck," recalls Cherry.
"They even paid to bring his family over from Sweden for Christmas. He's the reason I don't like Swedes."

Cherry then talks about how he realized that Astrom wasn't going to cut it. "We were working on break-out drills. I shoot the puck at him from the red line and it goes right through his legs and in. I grab another puck, shoot it at him and that one goes in. 'Next drill!' I yell."
Cherry never liked Astrom's sense of style either. "He wore clogs and you'd always here him coming, clomp, clomp, clomp down the hallway," Cherry said. "That drove me and the players nuts, so one day they nailed them to the floor. That didn't stop him from wearing them, so they set them on fire!"
Cherry smiles at the recollection of the story. "Actually, Hardy was a nice guy," Cherry added. "He just had a weakness with pucks!"

Story from The Hockey News - The Lighter Side of Hockey.
The awesome Cherry picture is from Lar's Gallery.