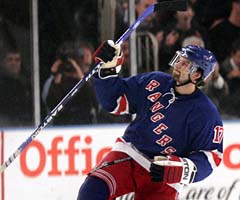 It looks as though Petr Sykora will be an Oiler as early as today, reports TSN. Sykora signed a 1-year deal today, but it is pending on an MRI that is to be done on his groin.
His best years were with the Devils in the late 90's, but has somewhat faltered ever since. His injuries are adding up as well.
In Edmonton, he could find his scoring touch back on a consistent level. One thing is for sure, Edmonton's second unit just got a lot better, as Sykora is an upgrade from Radek Dvorak!