SHOULD CROSBY WEAR THE "C"?

Share All sharing options for: SHOULD CROSBY WEAR THE "C"? 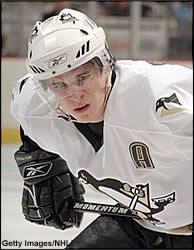 "Crosby acknowledged he and Recchi had issues before the 17-season veteran was traded to Stanley Cup champion Carolina. Apparently, Recchi felt Crosby was too vocal and demonstrative about calls that didn't go his way, especially for a rookie. The two since have talked, and Crosby said he welcomes Recchi's return."
That was quoted from TSN today.
What do you think of this report? Does it matter if Crosby would captain the Penguins this year? My opinion is 'no'. The Penguins are a young team minus Recchi and LeClair. Recchi could captain the Pens this season, as he had won the Cup in Carolina, but what could it possibly hurt the Pens for Crosby to captain them? We cannot draw comparisons to Vincent Lecavalier leading the Lightning earlier in his career, as Crosby broke the 100 point barrier in his first season, playing with underachieving linemates for a good portion of last season. Lecavalier took a long time to materialize into leadership material. For the record, Mario Lemieux made a living out of being too vocal as the Pens' captain. Alot of other examples of this scenario exist with other captains. So Recchi's point means nothing.
I don't like Crosby already, as I feel Crosby is being pushed down my throat by the Canadian media especially, and Alexander Ovechkin isn't geting fair coverage. But the bottom line is that Crosby is the 'real deal', and he can bare the load as captain even if Ovechkin would scoff at the notion. Recchi had better shut his yap now because he left the Pens to join the Canes in a Cup run last season. Crosby is committed to the Pens and can lead this young team into the future, even after Recchi retires.