The website Team XBOX released some screenshots of the upcoming NHL 07 this month. Check 'em out if you haven't seen them already. 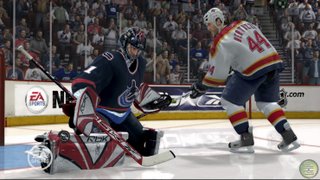 "Bertuzzi scores!" Well at least some of the players are on the right team, but we'll still have to change up a fair bit of the rosters from some of the summer's trades and signings. 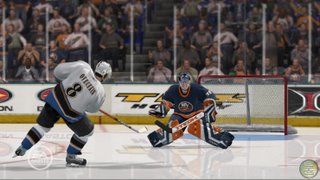 All right! I won't have to create Ovechkin and Crosby this year! (Dang that sucked in 06!) 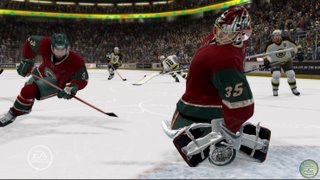 Cool, Fernandez squeezes the pads and checks behind him! Hopefully the goalies will be alot smarter this time around. I hated how they lunged at the shot in 06. It didn't look very realistic. Alas, one of the games's creators said that the goalies will be tougher. To that I say: "I'm changing the game tweaks to EASY!"
Apparently the PS3 will be released in November 2006. This is a dilemna, since I've only owned Playstations. The PS3 will be so expensive at its release date that I'm not sure if I'll get it right away. I may have to be extra patient.
But will the NHL 07 PS3 version have more up to date rosters?

NHL 07 XBOX-style is still scheduled to arrive in stores on September 14.

For even more info on this game, including team by team analysis' within the game, check out Isabella's post at Stick in Rink.